A Little History... MoonHouse Studio has evolved over the years with it's proprietor, Chris Gage. Originally known as Gee Whiz Recording, the commercial debut as a record making home studio was in Tulsa, Oklahoma in 1982. Using 4 track reel to reel tape recorders, then 8 track reel to reels, then 8 tracks synched with midi keyboards, then digital 8 track recorders synched to Cakewalk in an early Windows PC, Chris recorded albums and jingles that received local acclaim and national airplay from 1982 to 1991, when the studio relocated to Austin, Texas.

From a garage off of Brodie Lane in southwest Austin, Chris produced demos for many of the singers he worked with at Opryland's Fiesta Texas in San Antonio, including future major label artist Rhett Akins. Gage left Fiesta Texas to join Jimmie Dale Gilmore's band, who put the studio to fast use making pre-production demos for his upcoming album on Elektra Records "Braver Newer World". Along the way tracks were produced at the studio by Chris Gage and Paul Pearcy for a SubPop CD release "Jimmie Dale Gilmore and Mudhoney".

Gage met his current wife and musical partner Christine Albert in late 1995, and upon their acquisition of a 6 bedroom house in south Austin in 1999 (dubbed "The MoonHouse" for the fact that the moon appears in several upstairs windows over the course of the night) they remodeled 2 large bedrooms that would then become the newly named MoonHouse Studio.

In June of 2007 Chris and Christine began playing with the idea of moving the studio out of their home. With a single Google search for "commercial property in Austin", Christine discovered a duplex in the neighborhood with a zoning that supported a local business. She swung by the duplex without an appointment to check it out and the seller pulled up as she was looking around the yard. Leon, A lovely man from Ireland, was selling the property (which had operated as a foreign language studio for years) and was familiar with Albert and Gage's music. That first month the stars didn't line up, as Leon had made a pervious commitment that prevented further discussions about the possibilities for MoonHouse at the location. Disappointed, Chris and Christine kept looking around, knowing that nothing else could be that perfect.

A month later they received a warm email from the seller inviting them to revisit the property as the situation had changed and it was once again a viable option. Chris says "Our hearts were thumping because we knew it was the right place but weren't sure how we could pull this off. Our good friends and business angels, Lisa Rolke and Mark Turner, stepped in and decided it would be a good long term investment property and the new MoonHouse Studio was born."

Easier said than done. 5 months of remodeling - new air conditioning, new carpet, raising the ceilings, new plumbing (of course the plumbing was in the ceiling), all new doors, mahogany accents, stained glass, track lighting, finding the perfect grand piano....all happened thanks to an army of helpers. Kevin Johnson's woodworking detail sealed the professional look of the new studio. Special thanks go out to Baird Banner, Bill Small and Tommy Byrd for their help with the design and wiring.

That duplex housed both MoonHouse Studio and Troupe Gammage's Troupe House Studio for 12 years until just before the pandemic. As it turns out the landlords needed to sell and the MoonHouse was remodeled once again to become the current MoonHouse Studio, (mahogany ceilings and all) and the artistic juices are again flowing freely. 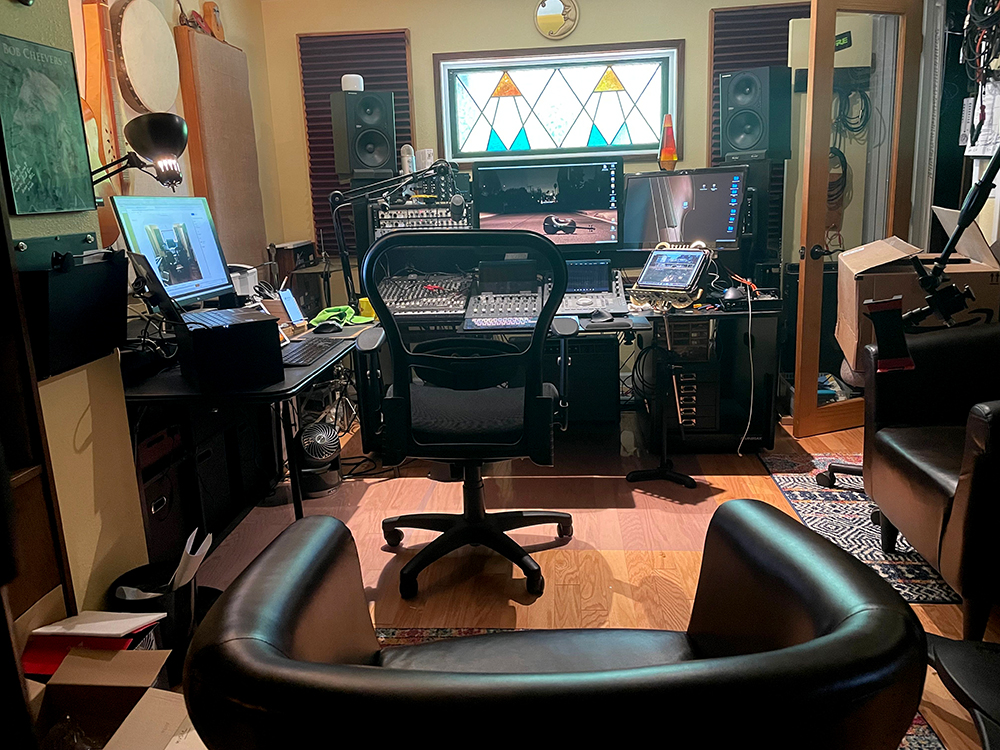